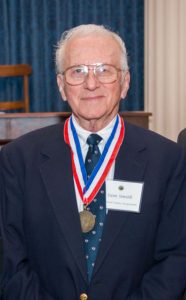 The endowment is in honor of Sam Smith and in memory of his wife Shirley who passed away in January 2013.

Jonathan, a healthcare administrator at the Jules Stein Eye Institute at the University of California, Los Angeles (UCLA), came up with the idea of honoring his parents with an educational endowment when his wife’s family did something similar for her parents.

“I thought it was just a really nice gesture, and a way for my parents’ legacy to live on for years to come” Jonathan said. “I wanted the endowment to be 100 percent my dad’s choice as far as recipient and purpose.”

Initially Jonathan suggested setting up the endowment at a university, but Sam was quick to choose the Haywood County Schools Foundation as the beneficiary. He specifically wanted the money to be used for staff development and instructional support.

“I have a great respect for my father and what he did for the public school system,” Jonathan said. “This is a way for teachers to get the resources they need to give the best instruction to students possible.”

Sam has a long history with Haywood County Schools.

In 1983, Sam, then the school system’s associate superintendent, approached the Haywood County Board of Education with a proposal to create an educational foundation. Sam’s vision was to create an organization that would provide instructional resources for teachers that state funding was not covering.

“I had no funding to start the Foundation, but I did get overwhelming support,” Sam recalls. “The Board of Education and central office administration were very receptive. Tom Posey, a principal at the time, got on board immediately and helped me get the Foundation going.”

Thirty-four years later, the Haywood County Schools Foundation is the longest running public school educational foundation in North Carolina. It has grown to more than $2.5 million in assets and funds grants for teachers and staff, awards scholarships, and supports students in need.

“I know this endowment will provide long-term support for the instructional needs of our teachers, as well as system-level funding to provide quality programs to children,” Sam said. “I am just very grateful that Jonathan and René established this in our name.”

The Haywood County Schools Foundation currently manages more than 70 endowment and scholarship funds that have been established by businesses and individuals in the community. Endowed scholarships and grants are generated through the investment of permanently-held principals, so that only the income from the principal is used for awards.

For more information about setting up an endowment fund or scholarship through the Haywood County Schools Foundation, contact Executive Director Jenny Wood Valliere at 828-456-2400 or visit www.hcsf.haywood.k12.nc.us.