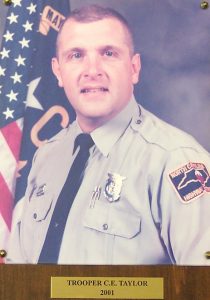 More than 16 years after his death, Master Trooper Calvin Taylor is still making an impact in the community.

On October 3, 2001 Trooper Taylor was killed when his patrol vehicle was struck by a tractor-trailer while on a shoulder of I-40 in Haywood County.

“When my family was searching for a way to honor my brother’s life, creating a scholarship in his name just made sense,” Pat Taylor, Trooper Taylor’s sister, said. “Our whole family advocates for higher education, and Calvin loved working with children.”

Trooper Taylor’s family, fellow officers, and friends donated money, held golf tournaments, and hosted fundraisers to establish a scholarship. Pat said that the family was also approached by several people who wanted to commit money to the scholarship fund in their wills. Just one year after his death, they had raised enough money to create the Master Trooper Calvin E. Taylor Memorial Scholarship Fund with the Haywood County Schools Foundation.

Each year since 2002, one graduating senior from Pisgah High School has been awarded a $1,000 to $1,500 scholarship from the Master Trooper Calvin E. Taylor Memorial Scholarship Fund.

Scholarship recipients must be a Pisgah High School student, which is where Trooper Taylor graduated from, and preference is given to applicants seeking to major in a law-enforcement-related field of study.

“It’s really rewarding for my family and my brother to be a part of fulfilling someone’s dreams of going into law enforcement,” Pat said. “Calvin wanted to be a trooper since he was 3 or 4 years old, and he was very dedicated to the N.C. Highway Patrol.”

Along with his passion for law enforcement, Trooper Taylor was an active volunteer in the school system.

“Any time they needed someone to talk to kids at an event or in the classroom, Calvin signed up,” Pat recalled. “It was important for him to be an encourager for them, and let them know that law enforcement truly cares about the future of our children.”

Trooper Taylor had been employed with the North Carolina Highway Patrol for 20 years, and was assigned to Troop G, District 5.

“My brother was very professional in the field and a man of great integrity,” Pat said. “Everyone who knew him, loved him; so, I’m glad that we are able to keep his memory alive through this scholarship.”

This May, the 17th Master Trooper Calvin E. Taylor Memorial Scholarship recipient will be named at the Haywood County Schools Foundation’s Partners in Education Scholarship Ceremony.

Applications are currently open for all of Haywood County Schools Foundation’s scholarships, including the Master Trooper Calvin E. Taylor Memorial Scholarship. High school seniors may pick up an application at their school’s guidance counseling center or download an application at www.hcsf.haywood.k12.nc.us.

The Haywood County Schools Foundation currently manages more than 60 scholarships that have been established by businesses and individuals in the community. Scholarships may be endowed or funded annually. Criteria for awarding the scholarship are designed by the donors and the Foundation Board of Directors. Endowed scholarships are generated through the investment of permanently-held principals, so that only the income from the principal is used for scholarship awards.

For more information about donating to the Master Trooper Calvin E. Taylor Memorial Scholarship or setting up a scholarship through the Haywood County Schools Foundation, contact Executive Director Jenny Wood Valliere at 828-456-2400 or visit www.hcsf.haywood.k12.nc.us.