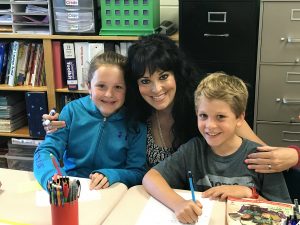 The annual award recognizes the most innovative and influential public school educators in the county. Prince was chosen out of a field of 15 other educators representing each of the district’s schools.

Over the past six years, Prince has taught hundreds of third, fourth, and fifth grade students at Junaluska Elementary School.

“One of the most prevalent factors that influenced me in becoming a teacher has to do with my own personal experience as a student of Haywood County Schools,” Prince, a Haywood County native, explained. “I remember so many of my teachers who went out of their way to not only help me learn the facts, but also cared about my social and emotional well being.”

Prince said she hopes to positively influence her students in a similar way.

Each morning, Prince greets her 25 fourth graders at the door with a smile and warm welcome to start the day.

“Elementary students are so special to me because they have an eagerness to learn and a curiosity about the world around them that only a child can express,” Prince said. “They are constantly taking their first steps into new frontiers of learning.” 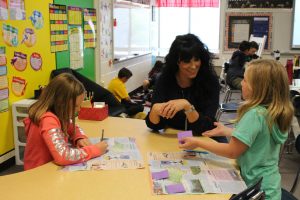 Prince’s teaching philosophy is based on each student’s unique learning needs. At the beginning of each school year, Prince gets to know her students and discovers what motivates them to succeed.

“By giving my students a safe environment to learn, grow, and succeed regardless of their background, they can set high goals and achieve them,” Prince said.

For Prince, establishing positive relationships with her students goes beyond the classroom. It is not uncommon to see Prince at her students’ sporting events, music concerts, or karate competitions on the weekends. She believes these small gestures of showing care and interest in her students’ lives result in greater lifelong success.

“Ms. Prince is very sweet and understanding, and everyone in my class is kind,” Lizzie Clark, a fourth grader in Prince’s class, said. “She reminds us that we can always make new friends anywhere we go.”

Prince said she wants her students to go home each day knowing that they accomplished something that will benefit them throughout their whole life.

“It was not until the first time I had to say goodbye to a classroom of students that I fully realized the difference my instruction and influence had made in their educational development,” Prince recalled. “While many professions measure rewards in sales volumes and bonuses, teaching measures rewards in the ability of a child to comprehend a new idea and build a relationship with someone they can trust.”

Prince smiled as she recounted a number of students who are now in middle and high school who still keep in contact with her.

“I always wanted to be a teacher, but winning Teacher of the Year just affirms everything I’ve worked so hard at over the years,” Prince said. “The outpouring of support from my family, community, school, and current and former students has been so overwhelming.”

Education officials praised Prince’s ability to build relationships with her students while teaching everything from North Carolina history to conceptual math.

“Ms. Prince goes above and beyond to reach all of her students,” Alex Masciarelli, Junaluska Elementary School principal, said. “Her passion and sincerity are evident at first glance.”

“Our students wouldn’t be successful if it wasn’t for our employees who protect them, feed them, get them to school on time, teach them, and love them every day,” Dr. Nolte said during the Teacher of the Year banquet on September 7. “One of my greatest pleasures as superintendent is visiting classrooms, and Ms. Prince’s classroom is a great representation of the wonderful teachers we have in our school district.”

Over the next year, Prince will act as an ambassador for teachers throughout the county and will serve on several district-wide committees. 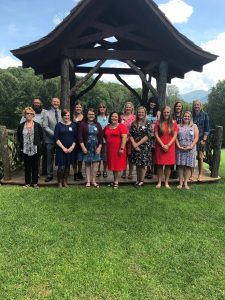