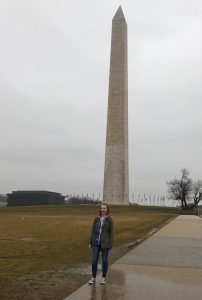 Among the thousands of people who were in Washington D.C. for the 58th Presidential Inauguration was Abi Bleakley, a first-year student at Haywood Early College.

As political activists and advocates from both parties flooded the streets of the nation’s capital, Bleakley’s attention was focused on immersing herself in leadership talks and getting to know students from across the country at the Envision Leadership Summit.

“Politics seems to get messy, but I believe in educating myself,” Bleakley explained. “This was a good opportunity for me to gain leadership skills and learn about the political process in general.”

During her five-night trip, Bleakley took in all the sights before diving into leadership-based seminars.

Bleakley, along with the hundreds other students in attendance, got to hear from two former presidential candidates, Governor Martin O’Malley and Carly Fiorina. They shared stories from the campaign trail, insights on what it is like to run for president, and even debated a few current issues facing the United States.

“They really set a good example for how a debate should be,” Bleakley said. “They kept their arguments respectable, and I really admired them both for that.”

“All the speakers made good points,” Bleakley said. “The overall theme from each of them was that you have to know who you are and what you stand for to be a good leader.”

Bleakley also worked in a group with other students in a breakout delegation about access to clean drinking water. Her group generated solutions and presented their findings at a final presentation in front of judges.

“Our students learn how to build relationships and become successful in college and outside of school,” Haywood Early College Principal Jeff Haney said. “Abi, like many of our other students here, is out doing great things and seeing herself as someone in this world who can bring about change.”

Although the focus of Bleakley’s trip was about the political process, she says she has not determined her career path yet.

“I’ve gone back and forth about my political aspirations,” Bleakley said with a smile. “I think I might be interested in majoring in political science, but I know I’ve got some time to figure it out.”