The Foundation is an autonomous body organized in 1984 by an initiative of the Haywood County Board of Education. Board members are Haywood County residents whose commitment to education is reflected in their personal service and dedication to Haywood County Schools. 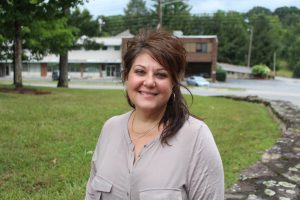 Jenny Wood has been the Executive Director for the Haywood County Schools Foundation since August 2011. With a passion for public education, Jenny was previously a teacher at Jonathan Valley Elementary School. She taught first and second grade there for 14 years. Jenny believes all children deserve a right to a free, quality education. She is a strong advocate for the schools, employees, and students of Haywood County Schools. Jenny serves as a board member for the NC Public Schools Forum and is the current president of the Altrusa Club of Waynesville.  Jenny also serves on the State Employees Credit Union Advisory Board, Champion Credit Union Board of Directors, and KARE. Jenny earned an associates degree in Applied Science from Haywood Community College, a bachelor’s and master’s degree in Elementary Education at Western Carolina University and a second master’s degree in Executive Leadership from Gardner Webb University.

Lisa Brown was born and raised in Haywood County, and she’s a 1980 Tuscola graduate. She has an Associates degree from Haywood Community College in Horticulture Technology and a Bachelor of Science degree from Western Carolina in Business / Entrepreneurship. Lisa is the Western Region Manager of the Canopy Realtor® Association and has been in association management for more than 20 years. In addition to the HCSF board, she also serves on the board of directors for Haywood Habitat for Humanity.  “I believe strongly in the mission of the Schools Foundation because public education affords every child the opportunity to make their own way in the world.”

Clint Connor is the principal of Pisgah High School. Clint has been recognized by The NCPAPA organization as a Distinguished Leader in Practice recipient.   He holds a Masters in School Administration from Western Carolina University and a Bachelor of Science degree in Health and Physical Education from Gardner-Webb University.  Additionally, he was recognized as a National Board certified teacher by the National Board for Professional Teaching Standards.  His tenure has included service at Asheville High, Owen Middle, Pisgah High, Bethel Middle, Bethel Elementary, and Clyde Elementary as either a teacher, coach or administrator.

Brittainy Crawford is the Chief Financial Officer at Champion Credit Union. She was born and raised in Haywood County and graduated from Pisgah High School in 2002. Her mother, Knox Hardin, spent her entire career working for Haywood County Schools. Brittainy attended UNC Chapel Hill, earning both an undergraduate degree in Business Administration and a Master of Accountancy degree. After college and prior to joining Champion Credit Union, Brittainy became a CPA and was an auditor with Dixon Hughes Goodman, specializing in audits of governmental and non-profit organizations. Brittainy and her husband, Brandon, have a daughter who is a student at Bethel Elementary School.

Rufus Dale has been a Board Member of the Haywood Schools Foundation since 1998. He is the owner and operator of RDS, a local business providing furnishings and equipment for public libraries and schools since 1988. Prior to opening RDS, he was President and owner of Dale Industries. He has been in Haywood County since 1962. Coming from a family of educators and being trained as a teacher, public education has always been a priority. Being a part of the Foundation Board provides a unique opportunity to assist in providing material for the teachers of Haywood County that otherwise would not be provided. Linking that with the long standing program of providing scholarships to the deserving students of Haywood County makes serving on the Foundation Board one his most rewarding community service activities.

Bria Davis has been employed with HomeTrust Bank since October of 2009.  She is the Branch Sales and Service Manager in the Waynesville branch.  She currently serves as the Treasurer for The Altrusa Club of Waynesville and as the 2015 United Way Campaign Coordinator.  Bria is married to Keith Davis, a chef at Sierra Nevada in Mills River, and a mother of two boys, Drake and Brendan.

Chuck Francis is Chairman of the Haywood County Schools Board of Education. He is employed by Coastal AgroBusiness, an agricultural supplies company based in Greenville, NC. Chuck is married to Vicki Francis and they have three grown children and two grandchildren.

Yvonne Hart worked in Haywood County Schools where she primarily taught Language Arts/Social Studies for 35 years at what is now Waynesville Middle School.  She has BS degree in Elementary Education from University of Dayton (Ohio) and Master’s Degree from Western Carolina University in Gifted & Talented Education.  Throughout her teaching career Yvonne held most officer positions in NCAE at the local and district levels.  She was a member of the NCAE Board of Directors. She advocated and chaired the committee that achieved the first local supplement for our teachers and principals. She is currently on local & district NCRSP Board of Directors and NEA Retired Elections Committee.  “Being on the HCS Foundation Board is a natural extension of the many years that I have been supporting the children, teachers, and other education employees.  Anything I can contribute to the success of our education program here in Haywood County is very gratifying.”

Vicki Hyatt began working at The Mountaineer in 1996 and has been the editor since 2003. She lives in Bethel with her husband, Rich, a 1972 Tuscola High School graduate. Once their two sons, Cole and Shay (both Pisgah High School and Western Carolina University graduates) were grown, they began a cattle operation — Sunburst Beef, LLC. She is a University of Montana graduate with a degree in journalism and has served in the Montana House of Representatives and as a Stillwater County commissioner in Montana where she grew up. “My time on the Haywood County School Foundation board has truly been rewarding. If the organization did nothing more than award scholarships to college-bound students each spring, it would be plenty. But there’s so much more — the gift cards to school employees, mini-grants to teachers for special projects and the list goes on. The most exciting project on the horizon is partnering with State Employees Credit Union to provide affordable teacher housing units in Haywood.

Brooklyn Jamison is a Haywood County native and attended Haywood County schools. She is a wife and mother to two boys, Bronx and Pike. Brooklyn graduated from WCU with a B.S. in Public Relations but has recently returned to earn her M.S. in Speech-Language Pathology. On the side, she owns a photography business and enjoys hiking, camping and anything outdoors. She is excited to be a part of this board and enjoys serving the kids, teachers and administrators of Haywood County.

Dann Jesse has served on the Haywood County Schools Foundation board since 2011. He is the systems engineering manager at Evergreen Packaging in Canton. Dann’s wife, Mary, is a retired Haywood County Schools teacher and his daughter, Heather, graduated from Pisgah High School in 2012. Dann is a 1980 graduate of Miami (Ohio) University where he received his B.S. in Pulp and Paper Engineering.

Bruce Johnson is the owner and president of Champion Supply, a janitorial supply distributor based in Asheville. Prior to Champion Supply, Bruce worked as an engineer at Hipotronics in Brewster, N.Y. and worked in various management positions with Harrah’s Casinos for 11 years, including Harrah’s Cherokee Casino. Bruce has a degree in Engineering from Duke University and an MBA from the Anderson School at UCLA. Along with serving on the HCSF board, Bruce sits boards for the Haywood County Chamber of Commerce, Region A Partnership for Children, Haywood County Economic Development Council, and various lay positions with First United Methodist Church of Waynesville. Bruce lives in Waynesville with his wife and three children.

Chad McMahon is a lifelong Haywood County resident and product of Haywood County Schools. He owns a State Farm Insurance Agency in Waynesville, is married to Deidre McMahon, and they have two sons named Parker and Leyton. Chad graduated with a B.S in Business Management from North Carolina State University and also as an MBA from Western Carolina University. In addition to serving on HCSF, he is active with the Haywood County United Way and other local organizations.

Chad McMahon is a lifelong Haywood County resident and product of Haywood County Schools. He owns a State Farm Insurance Agency in Waynesville, is married to Deidre McMahon, and they have two sons named Parker (WMS) and Leyton (Junaluska Elementary). Chad graduated with a B.S in Business Management from North Carolina State University and also as an MBA from Western Carolina University. In addition to serving on HCSF, he is active with the Haywood County United Way, Waynesville Rotary Club, and coaching youth sports.

Lynn Milner is proud to be a product of Haywood county Schools. She is a retired teacher and principal. She was the Regional TOY in 1980 and the Regional POY in 2000. She is presently a member of the HCS Foundation, HCC Foundation, and member and Vice Chairman of the HCC board of trustees. “The Foundation is vitally important to help maintain our excellent school system. The scholarships, grants, and other special programs enhance the work of our outstanding staff members.”

Morgan Plemmons is a native of Haywood County. She is a veterinarian at the Animal Hospital of Waynesville, an active member at Long’s Chapel United Methodist Church, and serves on the board for Long’s Chapel’s Child Enrichment Center. Morgan’s mother was a middle school teacher in the Haywood County School System for over 30 years. Morgan is a strong believer in public education and is excited to serve on the same board that awarded her husband a college scholarship many years ago. Morgan has two sons, Bradley and William. Bradley will soon be entering the public school system and Morgan is excited to be a “PTA Mom.”

Merritt Tongen is a native to Haywood County and a proud graduate of THS. She is a fourth generation owner of LN Davis Insurance Agency on main street in Waynesville. Merritt and her husband Mark share two boys, Calder and Hayes, and look forward to them growing up in the Haywood County Schools District.

Selena Williamson is the Vice President of State Employees’ Credit Union’s Waynesville branch.  After graduating from Tuscola High School, she earned her Bachelor of Science in Business Administration degree from Western Carolina University.   She and her husband Jeff live in Maggie Valley with their two children, Luke and Kendall.